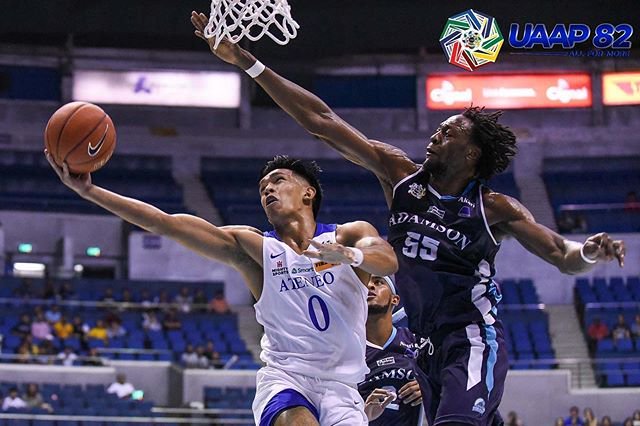 With their Final Four bid in peril, the Adamson Soaring Falcons will face another uphill battle midway through the elimination round. They’ll try to arrest their losing streak against the undefeated Ateneo Blue Eagles on Wednesday at the Araneta Coliseum.

After claiming a 3-2 record early in the season, the San Marcelino-based squad dropped the last two games in the first round against DLSU and FEU. The Soaring Falcons were also on the receiving end of the Suerte-Diakhite breakout game for their third straight defeat to extend their losing streak to three. They now stand in sixth place with a 3-5 card.

They will face an Ateneo squad that is in the midst of an 18-game winning streak which started from the second round of Season 81. The Tab Baldwin-coached squad won seven out of its first eight games this year by double-digit leads. The defending champions are banking their three-peat bid this season on defense, as no team has yet to score more than 70 points on the Blue Eagles’ seemingly impenetrable wall.

Adamson hopes to break Ateneo’s defense with the help of one-and-done guard Val Chauca, who topped his team in scoring with 17 markers on their Round 1 matchup against the Blue Eagles. He aims to recover from last Saturday’s loss, where he was limited to his first single-digit output in Season 82.

The Soaring Falcons will also need breakout performances from Jerrick Ahanmisi and Lenda Douanga. The second and third-best scorers for Adamson this season were considered as marked men on their first meeting against Ateneo. Both players were limited to seven points apiece during that game.

Coach Franz Pumaren’s crew needs to recover on the defensive end to keep its Final Four bid alive. In their last game against the Red Warriors, Adamson allowed UE to feast from the field with a 51 percent clip, which led to 48 points in the paint.

A win by Adamson will put them back in the thick of the Final Four race, where the top two to seven teams are currently separated by at most two games.